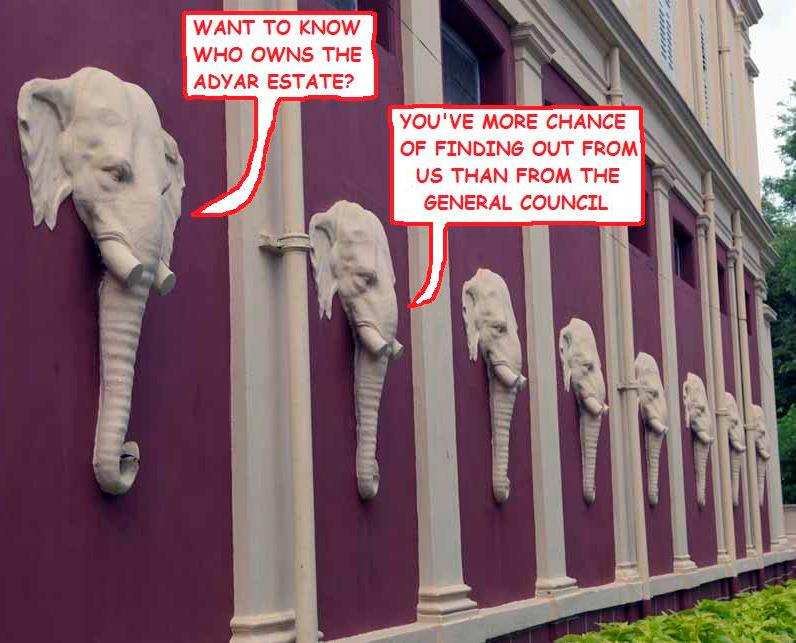 It has always been assumed that the Adyar Estate has been the property of the Theosophical Society, and therefore of its members, but in the light of the manner in which Radha Burnier ran the Estate, like a member of the British aristocracy, with the General Council looking on, and the General Council's subsequent strange retreat into silence after her death, perhaps the precise ownership of the Estate needs to be re-confirmed. Is the General Council now having to make a stand against the members because they failed to make one against Radha Burnier?

Radha Burnier was born on the Adyar Estate and regarded it as the family's country seat. She did not know, and probably could not imagine, a time when the Nilakanta family did not live there and run it. Although the Estate was supposed to be owned by the members, she adopted the role of feudal lord of the manor by banning some members from the Estate, with others being kicked out. There was no internal arbitration process involved in these exclusions and expulsions, even though as members, the victims owned the Estate. The General Council never once intervened even though they represent the interests of the members, who are the owners of the Adyar Estate. To a casual observer, it would look like Radha Burnier owned the Adyar Estate and the Theosophical Society members were only allowed to use it at her pleasure.

Radha Burnier's appointment of family members to positions of authority on the Estate appears never to have been opposed or even discussed by the General Council. As representatives of the owners of the Estate, they had a duty of care to ensure that the Estate itself was administered by officials who were representative of the broader Theosophical Society and not by one resident family. If the members are the owners then regular reports on the running of the Adyar Estate and updates on administrative appointments should have been made available to them. Despite the current silence policy, as owners, the members are entitled to information about the Adyar Estate on demand.

Is it possible that during the last thirty three years, the ownership of the Estate passed to Radha Burnier either by transfer or default. The General Council is famous for its ineffectiveness and compliance, and may have failed to oppose such a move. It is also possible that elements within the General Council may have assisted such a move and the possibility of this is illustrated by the following report.

Editor of the Theosophy Forward website; Jan Nicolaas Kind comments on the behaviour of General Council members at a meeting, in his article of March 17th 2012 entitled; “Adyar, Where do we go from here?”

“Several GC members did succeed in acting or voting according their inner conviction, vision, and principles or following instructions given by the members they represent, and that is how it should be.”

Not very encouraging is it? Some members clearly stood up for their principles but what about the others? Were they too frightened of the controlling power to make a stand? Or is the General Council loaded with stooges? This extract suggests that General Council members who are capable of representing their members effectively are the exception rather than the norm. The ownership of Adyar does not appear to have been discussed on this occasion but this quotation gives an indication of how useless the General Council appears to have been when coping with pressure, and that doing what it was told was standard procedure.

It is clear that the General Council could not act without the approval of Radha Burnier and perhaps she had more control over decisions than is generally admitted. Radha Burnier's autocratic rule over the Adyar Estate was legendary, and it is difficult to see her relinquishing power over it if had she lost the presidency during her lifetime. How often did the General Council agree to what Radha demanded and then hid under the table? Are they hiding under the table now?

If a transfer of ownership did take place then the big question will be; who owns Adyar now? This may be the underlying reason for the current silence.

I am sure that as this posting circulates that the General Council will respond by bombarding members with a ton of documentation providing irrefutable proof that the Theosophical Society is still the sole and outright owner of the Adyar Estate.