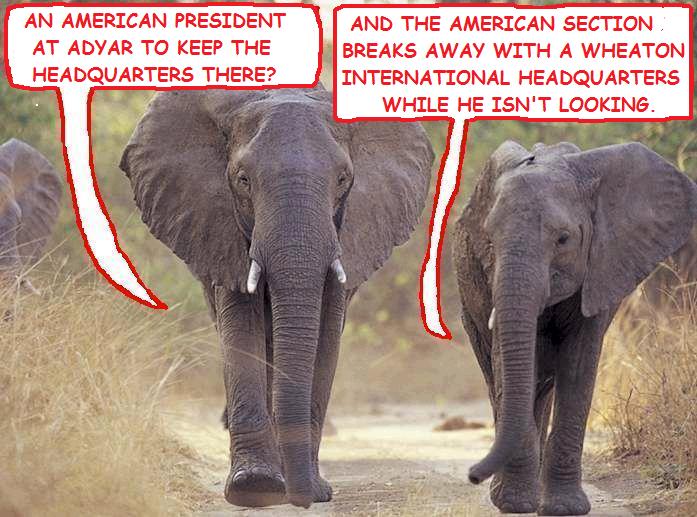 It may be part of an underlying strategy that the Indian section nominated Tim Boyd as part of a "keep the headquarters in Adyar" deal, as a Westerner as president is thought more likely to stave off the imminent disintegration of the Society. There is also the apparent need to appoint a Westerner to impress the authorities that the Adyar Theosophical society is an international body and deter them from enforcing a compulsory land purchase order against the Adyar Estate. Despite having been around for some years, news of this land purchase threat has only leaked out since the announcement of the candidates.

Supposing that the Adyar Theosophical Society survives this election as a unified body and that Tim Boyd is president, installed in Adyar. It will soon become apparent to all that he has no power to implement changes or any programme of reform without the approval of the Adyar controllers. The "move the headquarters to Wheaton" lobby will quickly gather momentum leading to a split with Adyar which will create two rival Theosophical Societies both with American presidents. The response of other sections will be to stick with Adyar or align with Wheaton, with some sections splitting or going independent altogether.

The Adyar controllers are, of course, only interested in maintaining their power base at Adyar and are unlikely to have any preference for either presidential candidate, as long as he is compliant in serving their interests. The members are steadily realising the sort of set-up they are supporting with their dues.

They may soon have a choice of more than one set-up.