This election is really inconvenient

for the leadership, isn’t it?

Why are the members being hustled 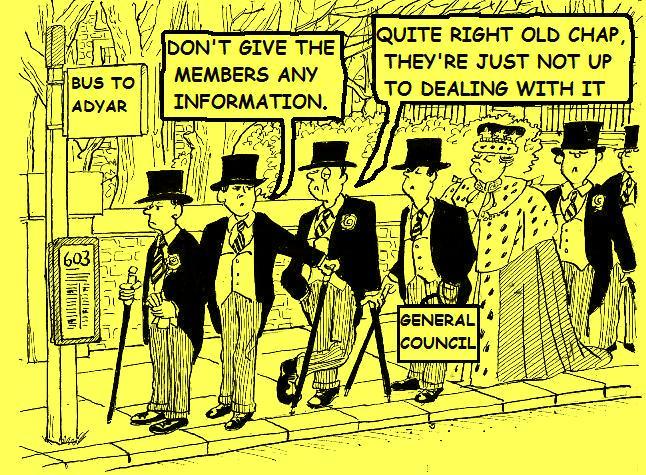 There must really be something rotten in the State of Adyar for the elite to go to so much trouble to suppress discussion. By maintaining a code of silence for the duration of the current presidential election, the leadership is not only telling the members that they are intellectually incapable of coping with an election campaign but also that there are matters or plans which the leadership would rather the members didn’t know about. The ruling elite must have closed ranks against the membership for a very good reason.

Of course the supposed no campaigning rule is just a ruse by leadership to justify the silence and doesn’t actually exist in the real rules. Everybody knows this is a scam. The leadership not only appears to think the members are stupid, they are also terrified of certain information leaking out. The election itself is also a scam with two compliant members of the ruling elite offered for what is said to be the top Adyar job. Finding two candidates who will just stand there like wooden posts, for the duration of the election period, is quite an achievement and many would find it impossible to show their face in public again after taking part in such a charade, which insults the members. 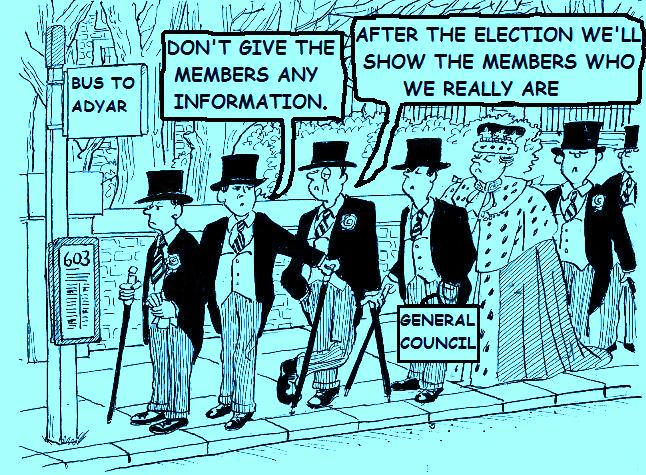 The leadership has lost the trust, and is squandering any remaining goodwill,

from the Theosophical Society, they are therefore unconcerned.

What will be their next move after the election?

Having already established a clear division between themselves and the general membership aka “BALLAST”, the ruling elite may now be ready to implement a plan, possibly based on claimed direct post-Blavatsky contact with the Masters in the distant past, to proclaim themselves the Spiritual Leaders of the Theosophical Society, with divine authority? This would make public any currently hidden belief in their divine authority and dispense with the need for further inconvenient consultations with the membership, such as presidential elections. Under this system senior officials would no longer be elected but rather co-opted by the existing leadership much in the same way that the Esoteric Section currently invites members to join. The Theosophical Society would become like a church ruled by a closed self appointed spiritual authority. In the wake of this change, the members drop down to the status of congregations.

The move to cheat members out of their voting rights in 2008 may have been intended as the first stage towards ultimately establishing a Theosophical conclave which retains the exclusive right to appoint its own supreme spiritual leader. The reason given for the move, at the time, was that the members just aren’t capable of making decisions of the importance of electing a leader. Sir Oswald Mosley gave the same reason for advocating the limiting of the voting franchise to an informed elite in Britain in the 1930s.

The President of the Theosophical Society in England may have jumped the gun when he publicly proclaimed himself Spiritual Head of his own section (2009/10 Winter edition of Insight Magazine page 3). No member of the ruling elite appears to have openly challenged this move thus establishing a precedent, and paving the way for such an assertion at international level.

Whatever plan exists, it must be certain by their compliance with the General Council's silence order, that the two presidential candidates either agree with it or are unable to oppose it. Even if there are no planned changes to the structure and constitution of the existing Adyar Theosophical Society as I have described above, it is difficult to see an comparable issue which would warrant the current level of commitment to silence by a ruling elite clearly anxious to protect its position of power.

The scenario described above is only an idea for consideration but by their silence it is clear that the Adyar Theosophical Society ruling elite must be hiding something very big for them all to keep quiet.