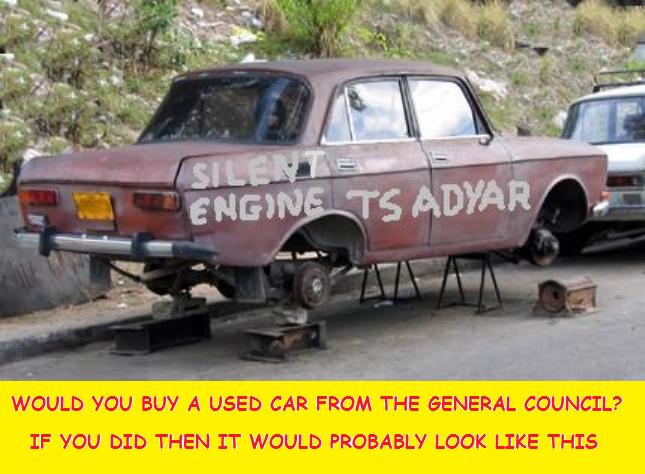 In a recent post, an apologist for the General Council has posed the question;

“What have you done for Theosophy today?”

Well here's a suggestion and one that most members will be up for;

"I've told the General Council they should resign"

Telling the General Council anything is a waste of time but you can see where this posting is leading.

It is obvious that something is badly wrong and if something isn’t done quickly, the members may find that they no longer have a Society.

The priority for the Theosophical Society members is to remove the General Council from office even if an alternative international administration is not immediately available. It is better that the posts are left vacant than leave these people in charge when their silence means that nobody knows what damage they may be doing. The policies they are currently pursuing cannot possibly be in the interests of the Theosophical Society or its members, and removal of the General Council would allow a badly needed breathing space to establish the position regarding the Society and the status of the Adyar Estate.

Whatever the reason for the silence, it has persisted long enough for the members to realise that it has become permanent. The General Council have no intention of revealing the reason for the silence and the members will be left to find out the hard way at some point in the future, or will have to remove the General Council from office to get the information on their own terms, so that they can deal with it.