Is this the true face of Adyar?

The letter below is the disgraceful response by the Adyar Estate General Manager, Mr S. Harihara Raghavan to Preethi Muthiah's criticism of the situation at Adyar Headquarters in a series of letters in 2009. The vindictiveness of Mr S. Harihara Raghavan’s action is unbelievable to UK members, where current employment legislation gives employees protection against this type of treatment.

which should have been addressed by the General Council. 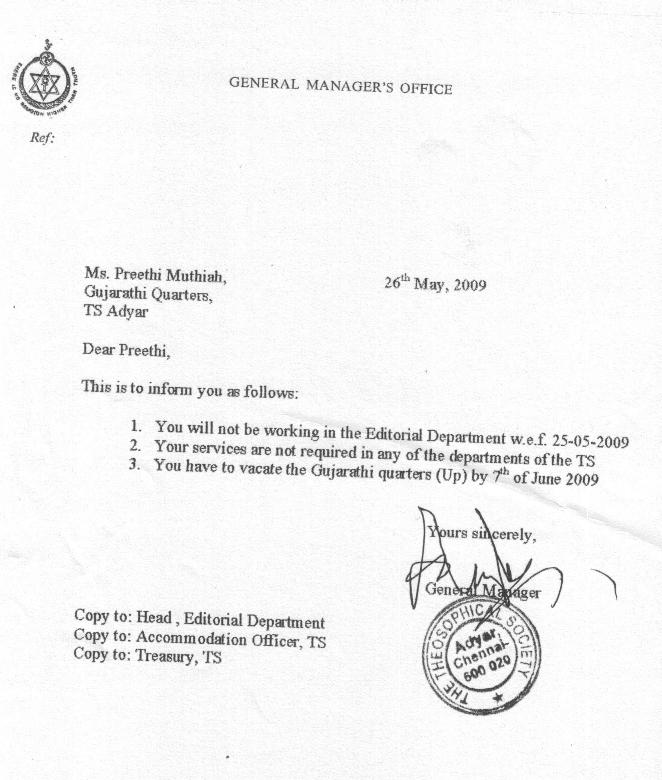 Please note that this lady, loyal to Adyar for many years, is not just being sacked from her job, she is also being evicted from her home and has only thirteen days to get out, inclusive of the date given on Mr S. Harihara Raghavan’s abrupt letter.

No provisions were made by the Society for Preethi's welfare after the sacking and eviction, and the matter was kept quiet. The General Council must have known about the treatment of this lady but their silence gave consent. It is absurd that the Theosophical Society helps the homeless around the world, through various branches of the Theosophical Order of Service, but the Adyar controllers are prepared to throw a woman out on the street.

The Adyar Estate management appears to have no formal policy on the fair treatment of employees and there is no grievance procedure to resolve disputes. It appears that anybody saying the wrong thing is kicked off the Estate with no recourse. The idea of a fair hearing does not exist at Adyar and the General Council should have done something about this situation.

It is appropriate to ask General Council members if they now have plans to introduce procedures to prevent this type of blatant victimisation from occurring again. Or are the General Council not bothered?