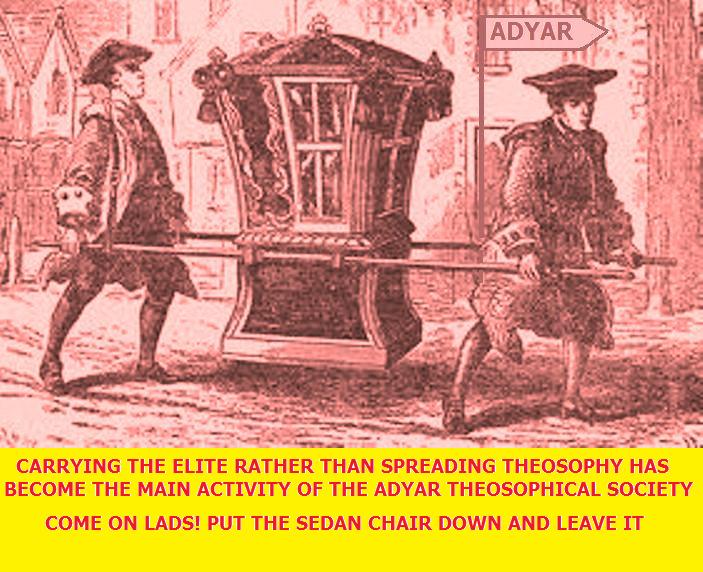 Refusal by management to keep workers informed has been a major cause of industrial disputes, and secrecy by governments has led to trouble on the streets. Withholding information has always been a recipe for trouble and often represents an indifferent and authoritarian attitude by those in power. Totalitarian governments will suppress news in order to keep themselves in power, and maintaining power must be one of the main reasons for the strategy of secrecy currently employed by the Theosophical elite. Anyone who thinks of the Adyar Theosophical Society as a democratic organisation of members is sadly very wide of the mark

The elite must be acutely aware that the Theosophical Society can manage and flourish perfectly well without them. Modern communications have taken the world in one direction over the last 20 years while the Theosophical elite have moved quite determinedly in the other. The actual mindset of the leadership not only pre-dates the internet but harks back to a lost age. High profile international swanning about has been superfluous to Theosophy since Annie Besant died but the elite still aspire to behave as if it were 1933. The membership is just regarded as a means by which the delusional world of genteel grandeur is supported.

Maintaining the wall of silence currently surrounding Theosophical Society issues clearly indicates that the leadership now regards the members as the enemy. This chasm between the elite and the membership must however be based on more than arrogance and the drive to remain in control. One must look deeper to deduce why the leadership has sought to create such a clearly defined division between itself and the members that it is reminiscent of a feudal or caste demarcation.

Underlying the aristocratic pretentions and dismissive arrogance there exists a core belief, held by most of the Theosophical Society ruling elite, that they carry some sort of divine authority to rule and that they are doing the general membership a favour by allowing them to be members. The belief in the possession of a divine authority surfaced in 2010 when one national president proclaimed himself  publicly to be "Spiritual Head" of the Society (one assumes just that national section). This belief in holding divine authority may come from claims of direct post-Blavatsky contact with the Masters in the distant past, and is now embedded in the thinking after 80 years of moving in ever decreasing circles.

Abolition of the post of International President and of the General Council will sweep away all this outdated and obsolete baggage, and will allow Theosophy to move into the modern era. Everybody with access to internet technology can communicate instantly, and those who choose to close themselves off by setting their machines to only accept e-mail from specific e-mail addresses, will become irrelevant. The members can regain control of their own society and actually do something positive with it rather than use it to support a grandiose secret cabal which is only concerned with protecting its own interests and self perpetuation for its own sake.