Shortly before her death, Radha Burnier took steps to ensure that the Adyar Estate would remain beyond the control of the member elected General Council. The silence of the General Council and the two presidential candidates is primarily to conceal their continued failure to assert any control over Adyar. They will be aware that once the news of the loss of Adyar as the headquarters becomes widely known, the break-up of the Society will begin.

For decades, the member elected General Councillors cringed in the presence of Radha Burnier and thanked her for giving them the right to breathe the air at Adyar. Radha knew that people with chronic cringing syndrome would be at a loss without someone to cringe to, after her death. In anticipation of this, shortly before her death, she appointed a new committee to replace her as the General Council’s object of creeping, adoration, terror, sycophancy, grovelling, unconditional submissiveness and any other type of self degrading behaviour that the General Council might find appropriate.

This new committee was appointed to run the Adyar Estate on July 25th 2013.The move was made in the normal manner by decree and without reference to the General Council. Radha probably didn’t consult the General Council on most matters because there was a limit to the amount of creeping that even she could stand. 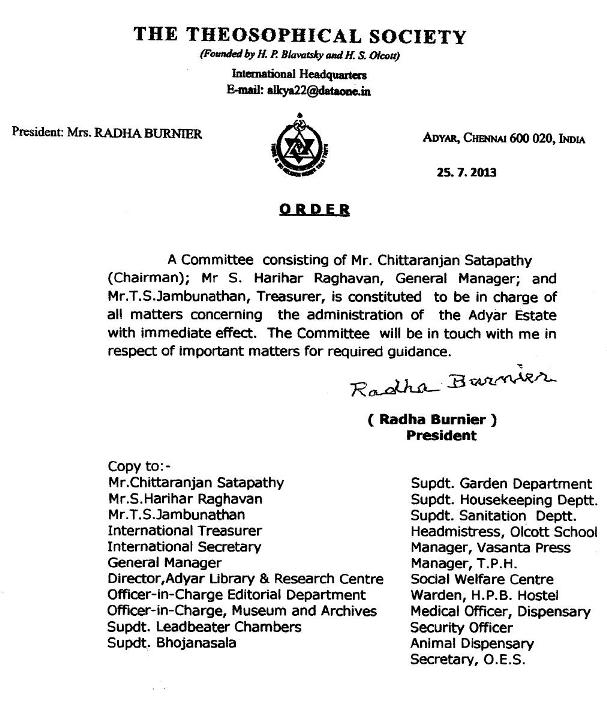 The new governing body of Adyar is now in place, the

General Council has done nothing to challenge the

move, and is now redundant.

As you can see from the above document, Radha Burnier issued a decree setting up a committee to run the Adyar Estate, consisting of Mr Chittaranjan Satapathy, Mr S Harihar Raghavan and Mr T S Jambunathan. The new committee was initially responsible to Radha Burnier, but on her death, International Vice-President Mr M P Singhal immediately stepped in to her shoes and effectively still functions as acting president. In possible anticipation of obtaining the presidency, he immediately strengthened his power base by appointing his wife, Mrs Shashi Singhal to a position of authority.

This committee was accepted by the General Council at the 2013 meeting with no attempt to assert any authority over Adyar. By the time the new president takes over, the International Vice-President and the Radha appointed council will have been in complete control for six months and this will make things very difficult for the new administration. The new president may be faced with the choice of complying with demands of the Adyar controllers, or taking his administration elsewhere.