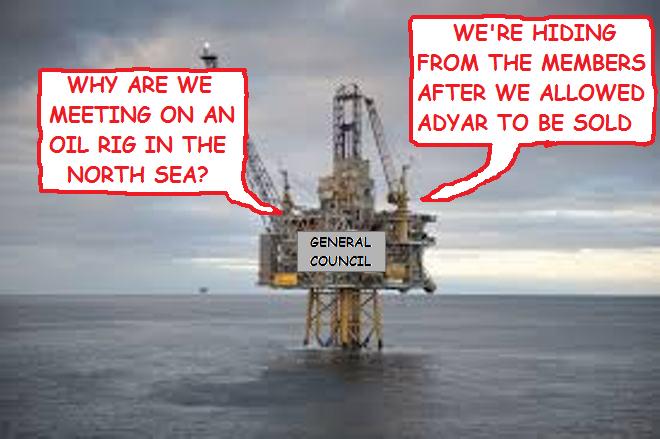 When Tim Boyd made his public commitment in January 2014 on Youtube to keeping the headquarters at Adyar, was he trying to head off a plan to sell the Adyar Estate, or distance himself from such a plan? It is noteworthy that the only comment that Tim Boyd has made on this election refers the status of Adyar. Having worked in real estate, he will know how the game is played, and leadership would have looked to him for advice on such matters.

Is The Adyar Estate to be sold? This in itself would be a bit controversial, but in addition, is it possible that a decision to sell the Adyar Estate is beyond the control of the General Council and that the Theosophical Society would not benefit from the sale? Adyar is worth a bit, so some elements in the ruling elite are likely to want to sell it.

The continuing decline in membership increasingly means that such a large international headquarters is surplus to requirements, and many members have questioned the need to continue to support it. Tradition keeps Adyar tied to the Theosophical Society but its role as an international headquarters certainly warrants discussion and another use may need to be found for it, if it is to be retained within the Theosophical movement. The main thing is that paid up members are consulted on this, just as they should be, on every other issue.

The existence of a plan to sell Adyar is only speculation but such an issue would be well worth keeping quiet about. In fact, allowing the loss of Adyar, without due consultation, would be good reason for the General Council members never to show their faces in public again. On current form, nobody would be surprised if a plan to sell the Adyar Estate, without consulting the members, were revealed.

Booting the Krishnamurti School out may be a move designed to make the Estate more saleable. The Krishnamurti people may still be holding on because they know that a forced eviction of a school would generate massive adverse publicity, and their continued presence reduces the Estate’s saleability. News of the eviction of a school could travel round the world and it is incredible that the leadership would even consider risking the Theosophical Society’s name being associated with such an issue, resulting in a public relations disaster. Forcing the school, established in 1973, off the Adyar Estate must already have damaged the Theosophical Society’s reputation in India and elsewhere. Were the General Council even consulted about this decision? Did they even bother to raise concerns?

The Indian Section may have known about and opposed plans for a sale, and therefore nominated Tim Boyd as a presidential candidate because they believed he would oppose the sale of Adyar, and has experience in real estate. Conveniently revealing old news of a compulsory land purchase order of against Adyar Estate may have been designed to present Tim Boyd as the Save Adyar Candidate. It was suddenly revealed, a few days after the candidate announcement, that Radha Burnier said in 2009 that she would prefer to be followed by a Westerner as president because this would convince the authorities that Adyar was an international headquarters, thus deflecting a compulsory land purchase order by the government. The release of this information goes against the current code of silence along with Tim Boyd’s assertion on the status of Adyar.

So there we are, two bits of information since the announcement of the candidates, and both are about the status of Adyar. Are we looking at the future of the Adyar Theosophical Society without Adyar? Definitely an issue for discussion but the General Council appear to be paralysed by fear or to have just given up. Thirty three years of creeping to Radha Burnier may mean that they all fall over now that she’s gone.

Any decision to sell Adyar may have been taken by people who have no interest in the future of the Theosophical Society or that it benefits from the sale. The General Council may have lost all power to prevent a sale and part of the reason for the current extended silence is that they are too ashamed to admit to the members that they have allowed this to happen.

The above is only an idea for consideration but the leadership’s silence, despite the increasing rumblings of discontent by the members, indicates that something really big is being suppressed.